Patriotic Coffee Drinks and Treats for Fourth of July Is there anything more patriotic than coffee? Don’t laugh, coffee actually played a big part in the founding of America.

The great thinkers of the 18th Century would gather at colonial coffee houses/taverns, such as the Green Dragon in Boston, to discuss the important issues of the time. In 1765, a crowd gathered burn an effigy of Andrew Oliver at Liberty Tree. Oliver was doing the unpopular work of King George III by selling stamps, a form of taxation.

The group eventually dispersed, but they gathered the next day at the Green Dragon to discuss the political events of the previous day. In so doing, they formed a group that they dubbed the Sons of Liberty. The Green Dragon Inn, Tavern and Coffee House was their regular meeting place.(2) 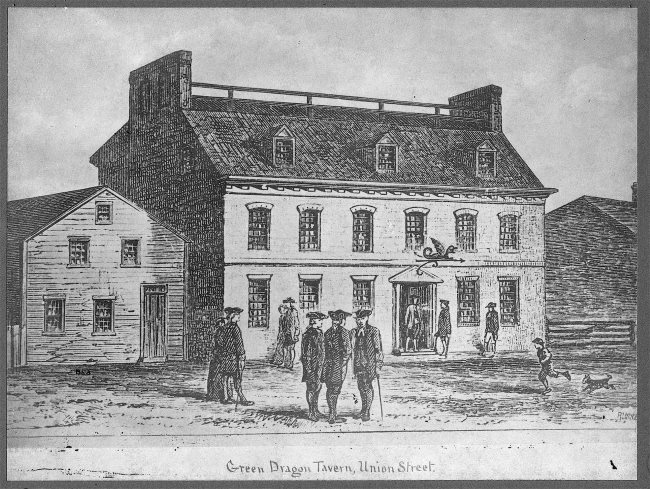 When the British sought to punish the colonies by unfair taxation on tea, coffee became not only the preferred drink, but the patriotic one as well.

The East India Company couldn’t conceive of the colonists doing without tea, so they sent over a full cargo of tea in a marketing scheme that would pay the taxes to the King, but cut out the middlemen merchants. This scheme infuriated the colonists.

A particularly energized group in Boston carried out the event which became known as the Boston Tea Party. They threw tea overboard and vowed against drinking tea, in favor of coffee.

With the advent of the Revolutionary War, coffee houses soon became the preferred meeting place of the newly formed Continental Congress. The most famous coffee house of the time was the Merchant’s Coffee House in Philadelphia, also known as the City Tavern. It was there where the Declaration of Independence was first read aloud to the public.

So do your patriotic duty and make sure you have coffee on July 4th!

Here are some great recipe ideas to jazz up your 4th of July brew.

Of course the Americano is the quintessential espresso drink for Fourth of July but why not take it up a notch by adding a little red, white and blueberry….

Handy hint – you can ditch the syrup and just use Java Momma flavoured coffee – try one of these below.

1 Refer to History of Food by Toussant-Soamat translated by Anthea Bell, page 585.